Pursuant to the Brazilian Corporation Law and Cosan’s Bylaws, the company must hold its annual shareholders’ general meeting up toby July 31 of each year, which will to resolve on the allocation of income relative to the current fiscal year‘s income and the distribution of dividends. The payment of annual dividends is determined based on the audited financial statements of the previous fiscal year.

Given the nature of Cosan’s business, particularly due to sugarcane harvesting periods, the company’s fiscal year begins on April 1st and ends on March 31 of the following yearst. This difference is common among companies in the sugar and ethanol sector industry in South Central Brazilocated in the center-south region of Brazil, due to climate and sugarcane harvesting conditions. Cosan’s Board of Directors can may declare interim dividends to be deducted from accumulated profits or existing profit reserves in the previous annual or semi-annual balance sheet. In addition, the Board of Directors may declare the payment of dividends based on the net income in the company’s semi-annual or quarterly balance sheet. The dividends paid each semester shall not exceed the company’s capital reserve. The distribution of interim dividends can be imputed to the mandatory dividends related to the net income at the end of the fiscal year in which interim dividends were distributed.

Mandatory dividends can also be paid as interest on equity, booked as deductible expenses for the purpose of income tax and social contribution on net income paid by the company.

See in the following chart the historical of distributed dividends by Cosan S.A., based on cash and competence basis, referring to the last years. 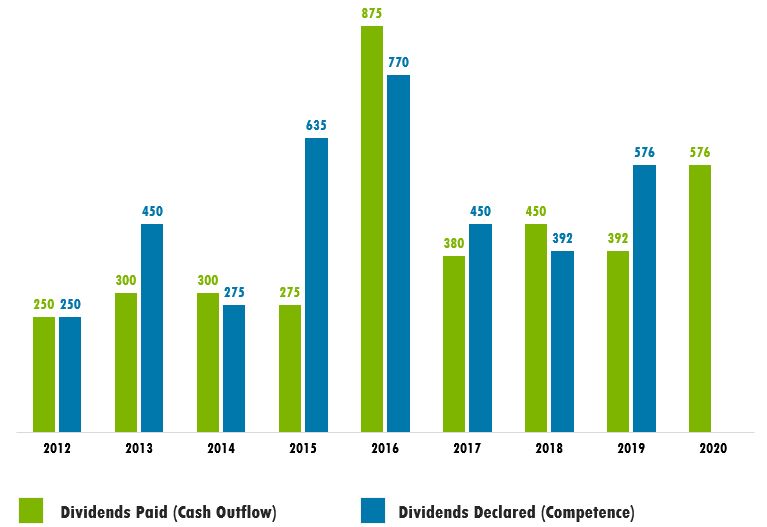 The chart below shows the dividends distributed to shareholders of Cosan S.A. the respective periods.